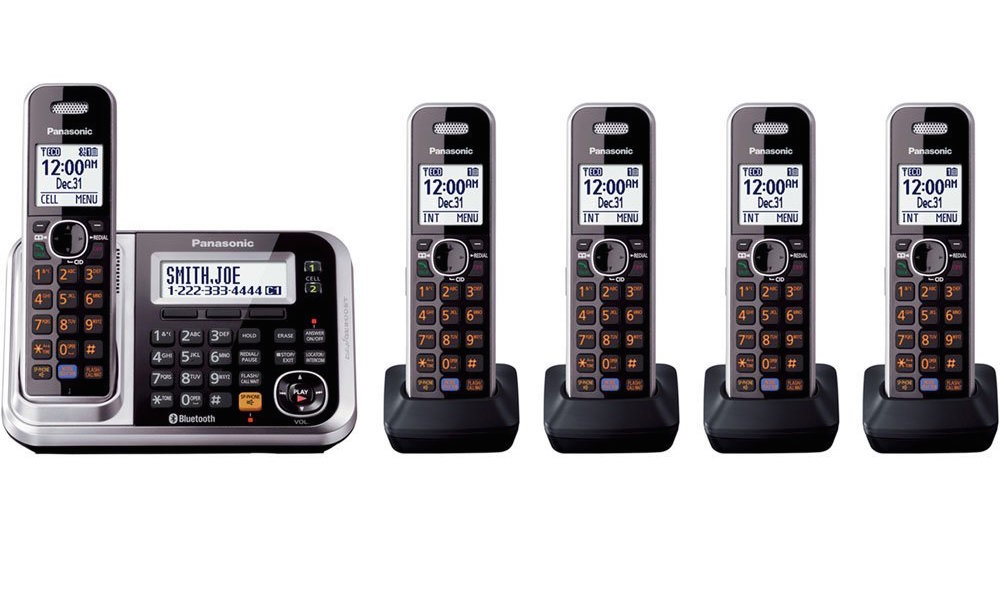 The Panasonic Link2Cell Bluetooth Enabled Phone KX-TG7875S is a home phone system that not only covers the responsibilities of a home phone, but also is an effective call blocker. This system includes one answering machine, and 5 cordless handsets, and the ability to add one more handset to make a total of 6 wireless handsets available. This device also comes equipped with the ability to use Link2Cell; a system that allows customers cellphone to wirelessly connect to the home phone system through bluetooth, so the use can answer calls on their mobil device. This device is also fitted with a “BLOCK CALLS” feature capable of blocking all unwanted calls from telemarketers, solicitors, credit card companies, political calls or any other type of unwanted callers. With the ability to block up to 250 different numbers this device virtually eliminates the need for a customer to purchase a different call blocker to block spam calls. The Panasonic Link2Cell Bluetooth enabled phone is also fitted with a feature called “no ring” which allows the user to set blocked numbers to never ring on the home phone, which allows for peace and quiet. This feature makes the device very worth while for customers experiencing frequent spam calls.

The Panasonic Link2Cell Bluetooth Enabled Phone KX-TG7875S, Silver is a home phone system that not only covers the responsibilities of a home phone, but also is an effective call blocker. Users benefit from not only purchasing a home phone system but also an effective call blocker that has the ability to block up to 250 different numbers with a “BLOCK CALLS” button. There are thousands of reviews on the product proving that the device is well tested, most all of which are generally positive on the device and how it preforms. With the inclusion of the Link2Cell technology it makes this device very useful for users who are generally more inclined to use their cellular device, but also would like to have a home phone. Customers also were very happy with the way the “BLOCK CALLS’ function of the device worked. Users found the addition of “no ring” function especially useful because it allowed for peace and quiet from those spam calls. this device is highly recommended for someone who is wanting to buy a home phone system, but also doesn’t want to suffer through annoying spam calls.