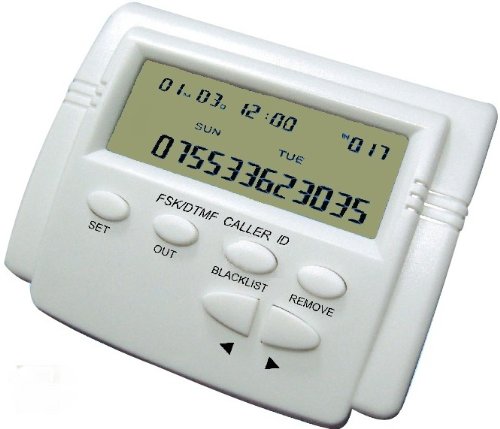 The T-Lock Call Blocker Version N2 is designed to block all unwanted calls from telemarketers, solicitors, credit card companies, political calls or any other type of unwanted callers. It is able to block up to 1,500 different numbers on its “Blacklist”, with any numbers up to 16 digits. This device has the ability to block up to 10 entire area codes, as well as different area codes, or unknown numbers. This version N2 was released due to earlier models having trouble dealing with displaying the caller ID’s, this device solves this problem by not showing them at all. This device includes the ability to store 100 recent incoming calls and 50 outgoing calls, allowing the customer to search through recent numbers. The screen display itself comes with 4 levels of brightness, along with its display that shows the date, time and numbers of recent calls. The T-Lock Call Blocker is fitted with a “Set”, “Out”, “Blacklist”, “Remove”, and “Left/Right” buttons on the device itself allowing for easy maneuverability within the display.

The T-Lock Call Blocker Version N2 is a very good device for blocking unwanted spam or telemarketers. Although being a fairly cost efficient device there are some problems customers have been reporting. The device’s display screen has been known to be hard to view with bright light overhead, and customer reports say that the brightness setting had little or no effect on the screen. This device is a re-release stating that it fixed bugs from earlier models showing consumers that its better than its predecessor. There are a few minor issues consumers have been having with the device, although there is a large amount of people very satisfied with how the device preforms.