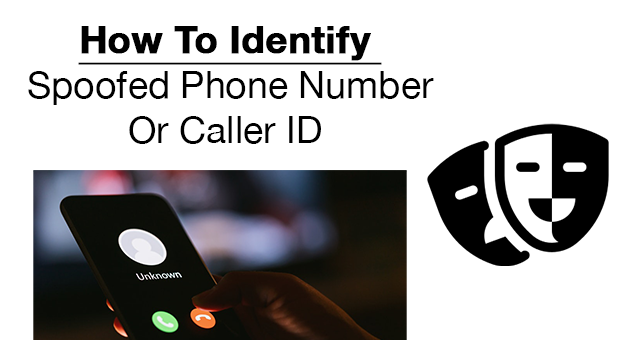 What is Caller ID Spoofing?

Caller ID Spoofing is when you receive a phone call or text message from a phone number which is different from the number that is making the call or text. Normally this results in the Caller ID of the incoming call appearing to be a local number, or maybe even someone you know, but the reality is that the person calling you could be very far away, and isn’t calling from that number at all. Since the person making the call can change what number appears as their caller ID, it is incredibly difficult to block these callers because they can always change their Caller ID to another number to circumvent the block.

The reason that Caller ID can sometimes be inaccurate, or “spoofed” is due to a technique called Frequency Shift Keying, also known as FSK. FSK is a process where binary data is passed along the phone line when someone makes a call. Some of that data (specifically, the data that shows up for caller ID) can be modified in transit, allowing a person who wants to spoof their number to modify what data appears on your caller ID.

The FTC has a handy infographic which demonstrates this: 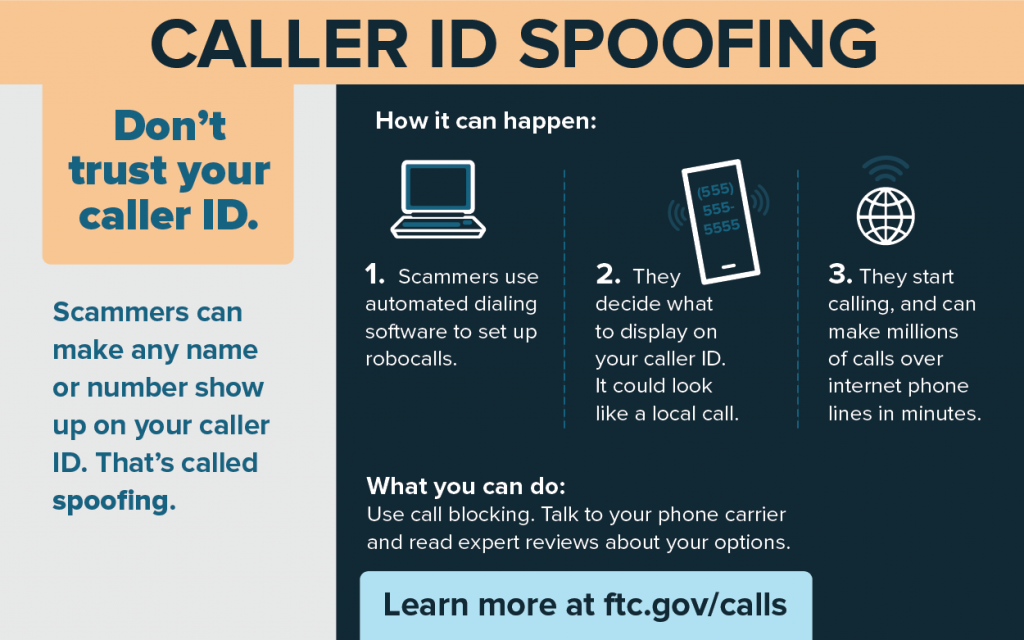 How to tell if someone is spoofing their caller ID

There are a few methods you can use to tell if someone is calling using a fake or spoofed caller ID. Some of these methods depend on the type of device you are using to receive the call.

The easiest way to determine if the person calling you is using a fake caller ID is by putting the number on hold and calling them back to see if the call connects. If the call doesn’t connect, then it’s safe to say that you are on the phone with someone who has spoofed their number. It’s important to note that even if you call the number and it connects to the service that appears on Caller ID, you should never give out information relating to your account details or bank account information unless you call the phone number of the company directly. You should always lookup on a search engine and call the number of the company directly that is requesting this information so that you can be sure you are speaking to a real customer service agent and not someone who is spoofing the caller ID of a bank or government agency.

2. Check if the number is a variation or close to your phone numbers’ digits

Spoofed calls sometimes have the appearance of a similar area code or in close proximity of the phone number the system is dialing, in order to appear more legitimate. This process is called “neighbor spoofing“. For example, if your phone number is (454) 555-1234, the spoofed call might appear as “(454) 555-1237” – close enough in proximity to your own phone number to draw suspicion, but similar to a phone number within your area code that you might be willing to answer the phone number just to see if it’s someone you know. In this case, it’s always best to let the call go to voicemail and not answer the phone call, because that might indicate to the person spamming or spoofing the call that it is a valid phone number – and set you up to receive more spoofed calls in the future.

3. Beware of automated messages or robocalls – these are usually a spoofed call

If a number calls you and the person on the other end sounds automated or recorded, it’s most likely a spoofed call. Automated phone dialers (robocalls) utilize software to identify phone numbers within your area code, and use those numbers. Sometimes the numbers that are used actually belong to other people within your area, but are spoofed with the robocaller. If you are unsure if you are speaking to an automated message or robocall, interrupt the person speaking and ask a specific question, such as “Where are you calling from today?” – if they do not answer or you hear a dial tone, it’s likely a spoofed number

If you’ve exhausted all other options, you can try to lookup the unknown phone number using our reverse phone number lookup service. It’s a free way to get information about a phone number, and is a handy way to determine if the number that’s calling you is spoofed, or legitimate. Keep in mind that there are sophisticated spoofing technologies that utilize a real phone number – this may not actually be the number that called you!

Depending on your location and laws of your country, spoofed calls may be illegal depending on who is calling you, but it varies from location to location. Generally, a company spoofing a phone number to show a toll-free call-back number is not illegal, and makes it easier for consumers to reach businesses if they need to call back at a later date.

The Federal Trade Commission (FTC) stated in the Truth in Caller ID Act that:

Note that this also applies to text messages as well, not just phone calls.

There are a few ways to cut down on the number of spoofed calls or calls coming from a fake caller ID. One way is to register your phone number on the DoNotCall directory, which will indicate to marketers and advertisers that you do not receive phone calls offering services, and makes it illegal for the marketers to call you.

If you have an iPhone, you can configure your iPhone to send all unknown phone calls to voicemail, which over time will reduce the number of phone calls that you receive. Robocalls work by testing to see if a phone number is active, and if a number that is dialed keeps going to voicemail, it’s likely that they will stop calling you using a spoofed number because it’s registered as “inactive” or “non responsive”.